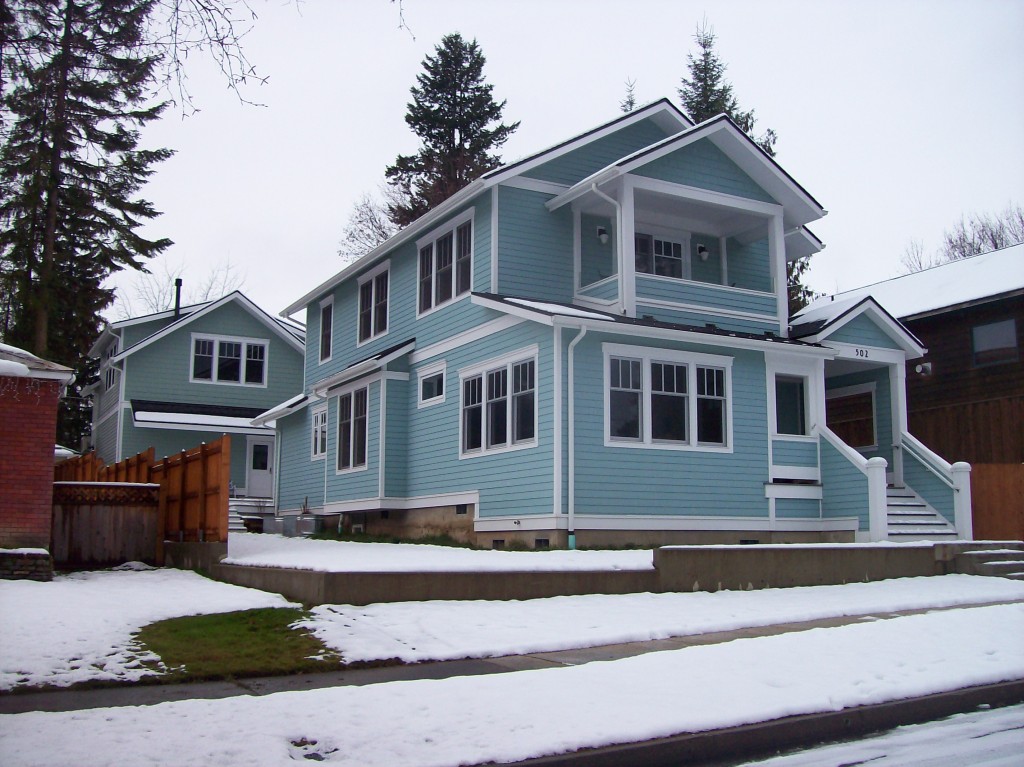 This is an in town one-of a kind, new house. Situated proudly on a south Sandpoint, sloping lot; nestled in and residing in a neighborhood of older homes. Taking the appearance of, one of many of Sandpoint’s surviving early 20th century, established properties. The exterior’s paint grade treatments, beaded wood soffits, covered entry porch, and double hung windows; the passerby might marvel at the degree of preservation; and not know this is a new home.

Things are not always as they seem.  Coupled with it’s timeless exterior façade, this project features many of the industries new high-tech elements. A high performance exterior shell, consisting of 2 x 6 conventional framing, a deployed “rain-screen” building wrap,  “Hardi” cement siding, and high density spray foam insulation.  A high performance heat pump, provides both heating and cooling, distributed by a two stage, variable speed forced air handler.  Installed in place of bathroom fans is a supper quite “air-to air heat exchanger”. Upon entering the bathroom, and turning on the fan switch, an attic installed unit is triggered.  As air is pulled from a bathroom, the heat is transferred to a heat exchanger plate, and moved to the outdoors. Replacement air is passively pulled back into house, across these same heat exchanger plates, transferring much of the conditioned heat, back into the house.

As the homes of the future become more “air tight”, a means of providing circulation and filtered “fresh air”, becomes an increasingly important issue. The combination of equipment in this home permits cost effective and comfortable conditioning (heating and cooling), and a means of sourcing fresh air while recycling previously heated air. This “near sealed envelope” will not permit a negative pressure drop within the house, creating stale air and a potentially dangerous indoor atmosphere.  This approach combats the effect commonly referred to “indoor air pollution”. A negative indoor pressure drop, can be the result of a tightly built home, lacking provisions to permit equal atmospheric pressure, both with-in and out of conditioned space.

Interior detailing ‘s are a seamless transition from the covered entry or ample rear deck. Wood flooring, marmolium, and wool carpets; create a comfortable and pleasing texture, throughout the common areas and three bedrooms.  Custom cabinetry and built-ins throughout kitchen and baths, coupled with tile and granite, are both elegant and timeless. Beaded wainscot ceiling and coffered ceiling treatments artfully placed, speak of early century architecture. Multi piece composite trim and baseboard provisions contribute to this effect, just not seen in modern production homes.  This home is a walk back to the past. A walk of well built 1930’s traditional homes, well situated on their properties, featuring modern appliances and state of the art amenities.